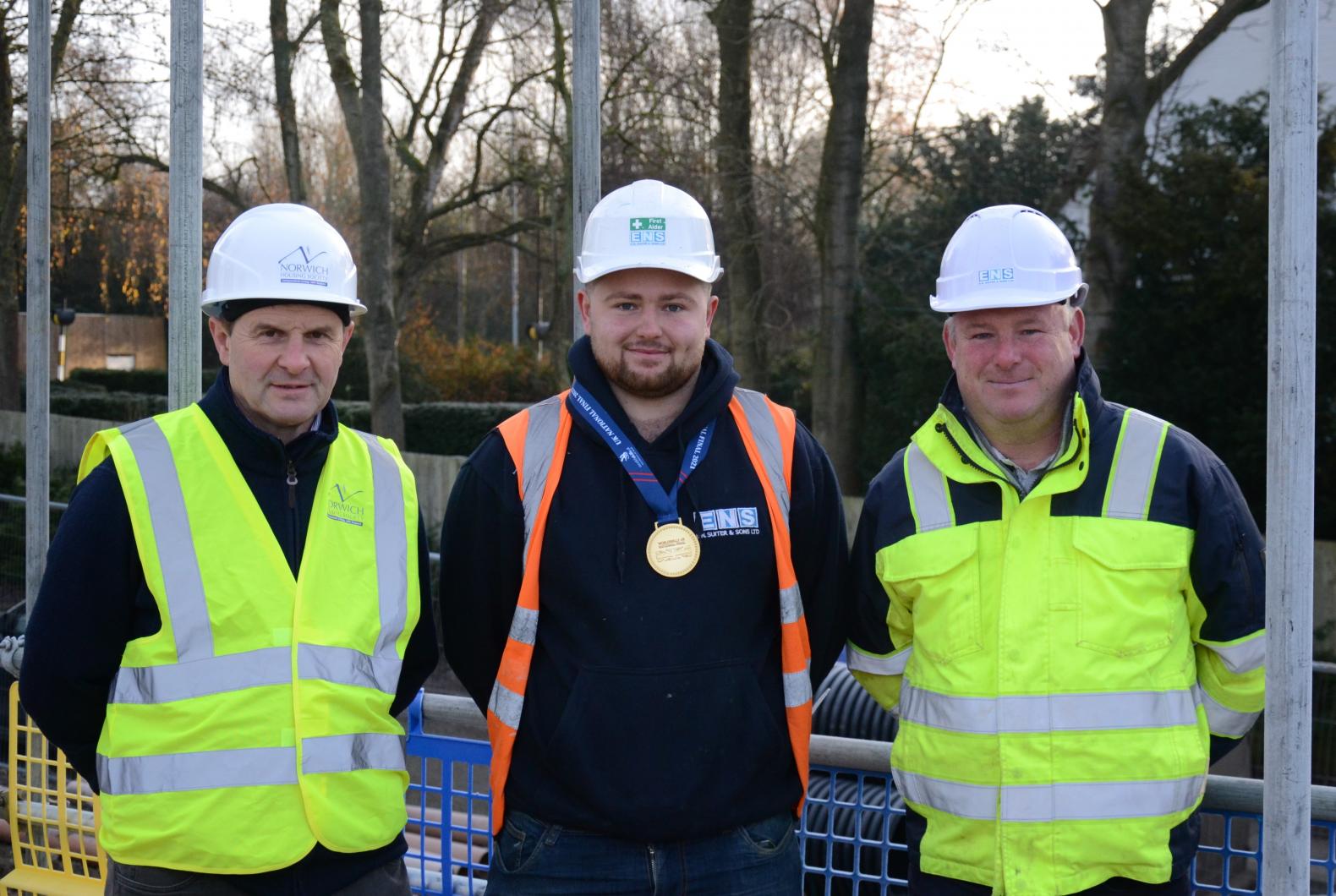 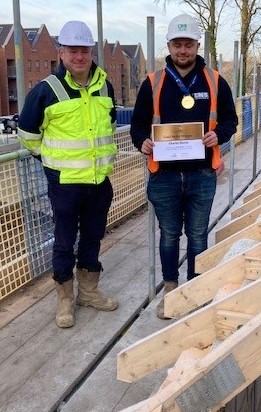 Charlie Reeve, a carpenter with Kings Lynn-based house builder E N Suiter & Sons, has triumphed in the national SkillBuild final, dubbed the UK's ‘construction Olympics’. He now hopes to follow in his father’s footsteps and represent the UK in international skills competitions.

Charlie, who is from Great Massingham,was one of 53 competitors from across the UK who took part in SkillBuild, the annual construction contest. This year the final was held at the National Construction College in Bircham Newton, Norfolk.

Over three intense days of competition the best construction trainees and apprentices from across the UK were tested, against the clock, in their chosen trades.

In addition to the prestige of winning the national SkillBuild title in their respective trades, the competition winners are in with a chance of selection to represent the United Kingdom in the 46th WorldSkills competition – due to be held in Shanghai, next October.

Charlie said: “I was thrilled to find out I’d won the gold medal. This is a massive achievement and is what I’ve been working towards for the last 3 years. Hopefully now I may stand a chance to be considered for the international competition.”

If Charlie is selected for the UK’s WorldSkills team, he will be following in the footsteps of his dad, Ian, who won a bronze medal in the bricklaying competition of the 1993 Youth Skill Olympics in Taipei, Taiwan.

Ian Reeve, who is now a Contracts Manager at E N Suiter & Sons, said: “It would be nice for Charlie to be able to represent the country like I did. He’s a smashing lad and he’s done really, really well.”

Charlie, who joined E N Suiter on an apprenticeship after leaving school at 16, provides a great example of the career progression that is possible within the construction industry.

Supported throughout in his training by E N Suiter, Charlie successfully completed his apprenticeship and is now in the second year of a Higher National Diploma (HND) in Construction Management with City College Norwich.

As well as continuing to advance his own professional development with E N Suiter, Charlie is also passing on his experience to those joining the firm. Charlie continues:

“SkillBuild is so important as it highlights careers in construction and we need to get more young people into the industry. I’m really proud to say that I am now a mentor for E N Suiter’s new apprentice carpenter.”

“It’s a fantastic achievement to have won the gold medal in this prestigious national competition and we are all incredibly proud of Charlie. Since joining us from school, Charlie has become a highly valued member of the team and we couldn’t be happier for him.

“At E N Suiter we are keen to support young people who are starting out in the construction industry, and apprenticeships are a great way to do this. As Charlie has shown, with the right attitude and work ethic, you can progress quickly in an industry that offers fantastic career opportunities.”

“It takes a huge amount of commitment and skill to compete at a national level in skills competitions - to win a SkillBuild Gold medal is an exceptional achievement by Charlie and we are delighted for him.

“The progress Charlie has already made in his construction career is a great example of how apprenticeships can lead to training opportunities at higher levels, helping employers to develop the next generation of leaders and managers for the industry.”

"SkillBuild brings the best out of the UK’s most promising construction trainees and apprentices. It teaches them to use their skills under pressure, to work to deadlines and to produce high quality work. The talent on display in this year’s competition was a credit to competitors and their trainers. It augurs well for industry, too.

"There are great opportunities for skilled construction workers in the UK. Demand for labour is high as the economy recovers from the pandemic. CITB estimates that over 217,000 new construction jobs will be created between now and 2025. It’s important that we increase the number of people in construction, the example of SkillBuild competitors will help do that. I wish all the competitors the very best in their careers."